We will pick you up in the morning from your hotel and start ourfull day Cappadocia tour. Pick up time is between 09:00 and 09:30, depends on your hotel. The tour starts in Ürgüp vvhere you will see fairy chimneys which are the Symbol of Cappadocia; popularly known as Three Beauties. Here you will make some unbelievable photos of this unusual landscape. Continuing ourtour, the route will take us to Red and Rose Valley. They are known as the most famous valleys in Göreme region for its lunar landscape and also they offerthe most enjoyble hiking routes. Ourtrails will take us to Çavuşin Village, one of the oldest villages in this area. İt is an old Greek village and the most important building there is a Byzantine church of St. John the Baptist.

After visiting Çavuşin, w e will continue to Avanos vvhere we vvill have our lunch. Avanos is a small town, known for its ceramics and it overlooks the longest river of Turkey, the Red River. Red River; old name Halys; in ancient times was the border betvveen Asia Minör and the rest of Asia. River is the witness of two majör events in history that had occurred there. 585 BC the Halys River was the place of famous Battle of Halys; the first battle in history that is known the correct date (May 28 585 BC – Battle of the Edipse). Two and halt centuries after that, during the time of Alexander The Great; Alexander knew and said it he vvill vvant to come to the end of the world, he vvill have to be able to cross the Haiys River; and in 333 BC Alexander has succeed in his venture. The most famous historical feature of Avanos, vvhich is stili relevant and very visible today, is its production of earthenware pottery. The ceramic trade in this district and its countless pottery factories date back to the Hittites, and the ceramic clay from the red şilt of the Red River has alvvays been used. Today, Avanos is the pottery çenter of Cappadocia and vve vvill visit a pottery atelier and shop.

There you vvill have a chance to vvatch the potters at work using kick wheels, the technique vvhich has remained unchanged for generations. After that vve vvill proceed to Ortahisar vvhich is famous for its picturesque stone houses and castle-like rockformation. İtiş 90 metres high natural fortress, a prominent landmark in the region – honeycomb with caves and tunnels, camouflaged by nature vvithout the slightest indication of human presence inside. Today, the castle has been restored and the peak is accessible by a staircase. The Ortahisar Castle offers a magnificent panorama över the fairy chimneys and the snovvy peak of Mt. Erciyes.

We vvill conclude the tour by visiting onyx jevvelry atelier and shop. Cappadocia is famous for it’s onyx and you vvill have a chance to see artisans, experts at making items of jevvelry and other attractive produets and artifacts. You vvill have a possibility to buy yourself a unique handmade souvenir from Cappadocia. Anticipated return to your hotel is approximately betvveen

This error message is only visible to WordPress admins 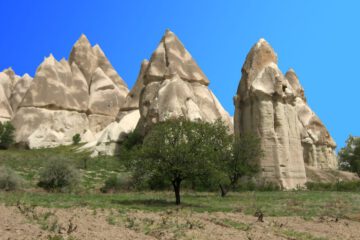 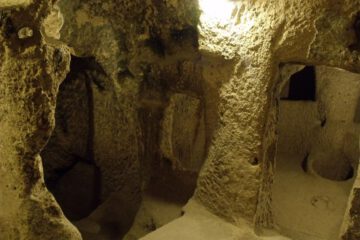 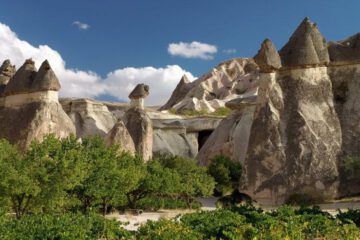